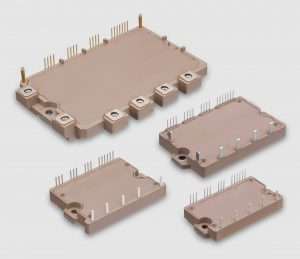 Fuji Electric Co., Ltd. (headquartered in Shinagawa-ku, Tokyo; led by President and Chairman of the Board of Directors Michihiro Kitazawa) is pleased to announce the launch of its new power semiconductor product, the X Series IGBT-IPM*1, which features the latest 7th-generation X Series devices to significantly reduce power loss.

To improve productivity, the manufacturing industry continues to introduce NC machine tools and robots to automate production site, and against the background of global warming, realizing further energy savings in production equipment has become a challenge.

IGBT modules, which are a type of power semiconductor, are electronic components that convert voltage, frequency and AC/DC power through switching the power on and off. IGBT-IPM is equipped with a self-protection function to prevent failure due to overcurrent or overheating. For this reason, they are widely used in NC machine tools and industrial robots for production equipment that require high reliability.

Fuji Electric launched the X Series IGBT-IPM, which incorporates the latest 7th-generation power semiconductor device and contributes to energy savings in production equipment by the industry’s highest class of low loss performance. Mass production of the product starts in December and sales will be expanded globally, focusing mainly in Japan and China and so on, where automation is progressing.

This product is equipped with the latest 7th-generation IGBT device, which achieves the industry’s highest class of low loss performance through reduced device thickness and miniaturization of the surface structure. In power semiconductors, as the operating temperature of the product increases, the switching speed generally decreases and the power loss increases. However, with this product the power loss is reduced by using an IC that controls the IGBT drive to prevent the switching speed from decreasing under high temperature conditions.

This product reduces power loss during inverter operation by approximately 10% compared to the previous product (V Series IGBT-IPM) and reduces heat generated by power loss. As a result, the footprint area has been reduced by up to 54% compared to the previous product. This contributes to the energy savings and miniaturization of production equipment.

The IGBT-IPM is equipped with the IGBT device’s overheat protection function. With this product, when the temperature of the IGBT device exceeds 175 °C, the IGBT-IPM outputs an alarm signal to the control unit on the equipment and stops the switching operation to prevent the IGBT-IPM from failing.

In addition, this product is equipped with the industry’s first the warning output function of IGBT chip temperature, which outputs the warning signal when the temperature of the IGBT device exceeds 150 °C. Since switching operation is possible from when the warning signal is output until the temperature reaches 175 °C, where overheat protection is activated, the controller on the equipment can stop the production equipment at any time for maintenance. This enables sudden stoppage of production equipment to be avoided, contributing to stable operation.